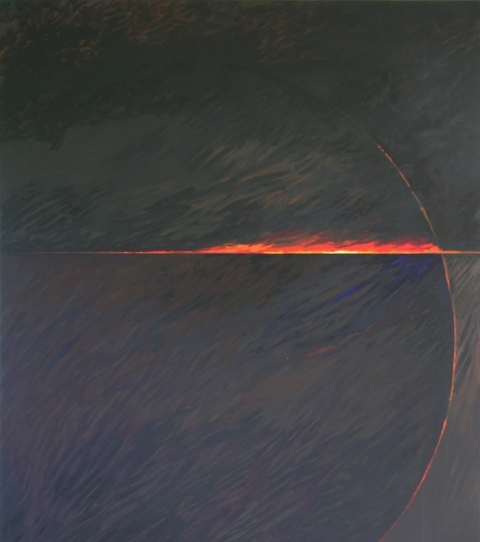 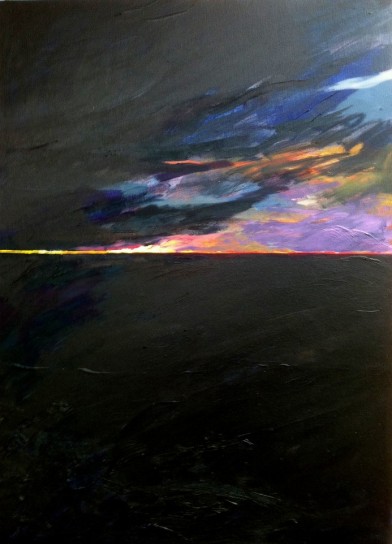 Landscape has  always  held many facets of interest for the artist.  Living here in the landscape of Co. Meath, near Newgrange, one is always aware of the River Boyne meandering like an umbilical cord, historically echoing an unbroken connection, a continuity with the first people who first settled in this area over six thousand years ago.

Landscape and the element which holds sway over it – the sky, are the two elements which interact in a very profound way visually and  in the practice of man’s existence on the planet.

Not least at Newgrange on the morning of the Winter solstice the 21st of December each year.  In the days leading up to the Solstice, as locals we find ourselves fretting and wishing for a bright clear sky on the morning and feel at one, a very direct connection with the people who five thousand years ago built the monument and probably watched and waited in the same way on the days leading up to each  solstice as it approached.

The  liminal  a horizontal line, is a  symbol of the place where the sky ends and the landscape–the dwelling place of all humanity–begins.   In the wider global context of humanity the liminal suite is a search for imagery where one can visually connect to one’s fellow man in a universal way, erasing that aspect of political borders and cultural differences which are often seen as negatives – rather than manifestations of the broad spectrum and quality of the human spirit.

The nature of the landscapes where each of us acts out our lives, varies. However what we actually do there–what we dream and hope for–is fundamentally the same. It is the global human condition common  to all mankind.